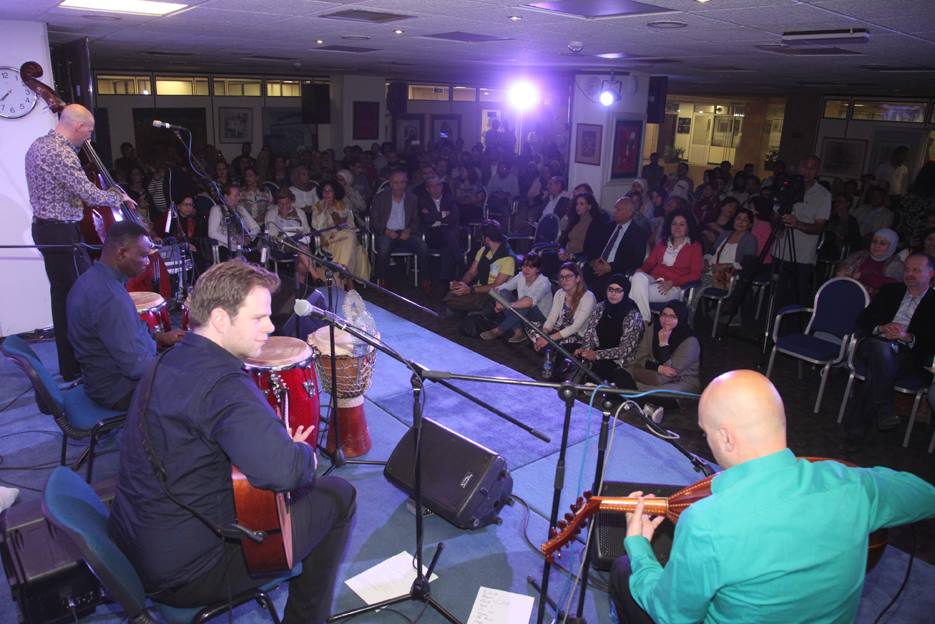 We had a great time playing in Amman Jordan! The first show at the Blue fig was magical, playing for an appreciating audience. The atmosphere was relaxed and the warm night was a beautiful start of our five gigs. After the show we went to a place called Dunia where the owner told us he had named his bar after one of our albums Ya Dunya and told us he is a big fan of NO blues. We had waterpipe, drinks en food and enjoyed great Jordanian hospitality.

On day two we played at the Haya Cultural Centre after taking a walk in the area. This theater was a good setting for the NO blues music. Sound engineer Hassan from Eclipse Events did a great job and the band really took off during the show. The audience gave a standing ovation and after the show we went out for food.

Day three was our Kings Day gig at the Embassy. In the Netherlands everybody gets dressed up in orange and celebrates. The Dutch Embasssy was coloured with orange lighting, so we felt right at home. Although the evening was a little chilly, the gig went great and the people kept warm by dancing. A couple from France had come in especially from Jerusalem to watch us play. It is always an honour when fans drive a long way to come to one of the gigs.

On day four the band went cultural and we visited the Citadel at Amman. After seeing the ancient buildings and the amphitheater we went to the Shomann Foundation for our fourth gig. The energy in the room was truly amazing with people singing along and clapping to the songs. Young and old enjoyed the music and after the show and encores we went out for a great meal and more waterpipe.

Our last show was at the Maestro Bar. A completely different venue from all the others. A smokey club with a young crowd. We played with a lot of energy and fire. Again the music came across and the room exploded after solos. People clapped and danced, a great last gig to our stay in Amman. After the show Haytham and Osama had to hurry to catch their flight. What a night!

We want to thank everybody who helped make this tour possible; among others Lama, Ghadeer and the rest of the good people at the Amman Jazz Festival, Maartje Peters at the Dutch Embassy, the Fonds Podiumkunsten for helping us out, the sponsors among which Amstel, the sound engineers, Safe for dragging the instruments around, productiehuis Oost-Nederland and all the people that came out to see us. We hope we’ll go back to Amman!